According to The Babylonian Talmud,  "The advent of the Messiah was pictured as being preceded by years of great distress"  (Shabbath, 118a) and more specifically detailed, "Our Rabbis taught: In the seven-year cycle at the end of which the son of David will come...at the conclusion of the septennate, the son of David will come." (Sanhedrin, 97a) (The word septennate refers to a period of seven years)

Raphael Patai, Jewish historian and author, in his book, The Messiah Texts, "The idea became entrenched that the coming of the Messiah will be preceded by greatly increased suffering...This will last for seven years. And then, unexpectedly, the Messiah will come." (pp. 95-96)

The Dead Sea Scrolls and ancient Jewish literature called the severe troubles of this seven-year period "the birth pangs of the Messiah."

4 And Jesus answered and said to them, “See to it that no one misleads you. 5 For many will come in My name, saying, ‘I am the Christ,’ and will mislead many. 6 You will be hearing of wars and rumors of wars. See that you are not frightened, for those things must take place, but that is not yet the end. 7 For nation will rise against nation, and kingdom against kingdom, and in various places there will be famines and earthquakes. 8 But all these things are merely the beginning of birth pangs. 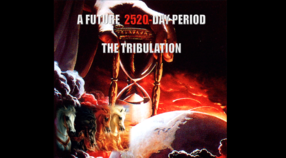 1 Jesus came out from the temple and was going away when His disciples came up to point out the temple buildings to Him. 2 And He said to them, “Do you not see all these things? Truly I say to you, not one stone here will be left upon another, which will not be torn down.”

3 As He was sitting on the Mount of Olives, the disciples came to Him privately, saying, “Tell us, when will these things happen, and what will be the sign of Your coming, and of the end of the age?”

The Time of Jacob's Trouble/

The 70th Week of Daniel

Then he shall confirm a covenant with many for one week;
But in the middle of the week
He shall bring an end to sacrifice and offering.
And on the wing of abominations shall be one who makes desolate,

Jesus warns that what follows "the abomination of desolation" at the mid-point of the 2520 days is the "great tribulation."

One can also refer to the 1260 days prior to the midpoint as the Tribulation, but only the second half is referred to as "great tribulation."

15 “Therefore when you see the ‘abomination of desolation,’spoken of by Daniel the prophet, standing in the holy place” (whoever reads, let him understand), 16 “then let those who are in Judea flee to the mountains. 17 Let him who is on the housetop not go down to take anything out of his house. 18 And let him who is in the field not go back to get his clothes. 19 But woe to those who are pregnant and to those who are nursing babies in those days! 20 And pray that your flight may not be in winter or on the Sabbath. 21 For then there will be great tribulation, such as has not been since the beginning of the world until this time, no, nor ever shall be. 22 And unless those days were shortened, no flesh would be saved; but for the elect’s sake those days will be shortened.